The wait is over, the Steve box sets have arrived in Glastonbury. The pre-order page is now a live order page and the shipping prices are hopefully at optimal buyer-friendlyness - plus there will be an exclusive little offer for anyone buying the box-set here from the Mother-Teapot.

The pre-orders will be processed in the date order they were placed starting with those which arrived on the 7th July.

Searching For The Spark Box-set

Steve and Miquette un-box the box for the first time.

Catch-up on a couple of prime slices of promo tomfoolery for the new album which is gathering justifiably great reviews.

Gong custard-pie fight in the studio!

Steve Davis chats with Kavus and Dave Sturt in his back garden - which I must say he has let go a bit.

Okay so they didn't actually have a custard pie fight in the first film, but it might have all kicked off just after the camera sopped rolling - I'm pretty sure Cheb might have had one or two at the ready behind the sofa - he just had that look in his eye.

Steve describes the rare 'Spark' and live tracks which feature on a 7 track promo/sample CD which has been sent out to the press to promote the forthcoming Box-set.

PRE-ORDER - Searching For The Spark Box-set

A chance to glimpse some sounds and covers of October's huge Hillage feast.

Gilli's funeral, a private affair, will take place on the morning of 7th September. Then there will be an open, informal gathering in a local hall in the afternoon.

Honoring her belief in past lives and remembrances of all things witchy, Gilli will not be cremated, (no more burning thank you!), but will be buried. Ynys Allen tells me that "the graveyard is really beautiful and almost overrun with trees" - something that would also meet with Gilli's approval.

Gilli died at mid-day in Australia surrounded by loved ones. She had been admitted to Byron Bay hospital with pneumonia a couple of days ago. She was 83 and also ageless.

Her unique stage presence and vocals manifested and determinedly represented a vital, deeply fundamental feminine principle within the Gong universe. She last performed with the band in 2012.

The two images of Gilli that spring to mind when I think of her are reading a newspaper, feet up on a tour bus, in our kitchen, in 100s of dressing rooms - she was never without a newspaper whatever country we were in, or laughing - a little Gilli semi-suppressed chuckle at the absurdity of pretty much everything.

We will miss her. Love to the Good Witch and all who feel her loss.

PRE-ORDER - Searching For The Spark Box-set 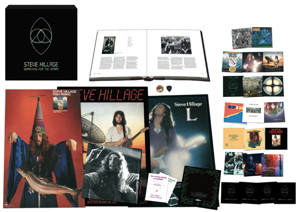 We have been working on this box for almost a year. Steve and Miquette's large accumulation of photographs, papers and artifacts has been sifted for gems, the Gong/GAS archives have been carefully trawled for treasures. Photographers from the past have been hunted down across the web and tickled into action. Long un-heard tapes have been lovingly baked, transferred and tweaked. And Steve and I wrote and wrote and wrote (with the odd heated passionate discussion mediated by Miquette) to assemble this ultimate festival of Hillageness.

Cards will not be debited until the pre-order is posted just before the 16th September release date.

Gilli's house in South Golden Beach has finally been sold which means the pressure to cover her care-home debts has been lessened but not actually removed. The house wasn't in great condition as Gilli really didn't like to uproot the trees, bushes and creepers which surrounded and covered the property and disturb the wildlife - the 'norm' over there is to hack everything back, cover the house in preservatives and set traps for the insects and snakes. Gilli preferred talking to the plants and creatures - even if they nibbled at your house.

One of the consequences of the sale was that Gilli's eldest son Tali and Harry Williamson needed to make a 2000km, 3-day round trip to collect daevid's archive of papers, drawings, recordings and a few personal belongings. These will now be stored in Melbourne away from the damp, paper-rotting, tropical North. They will be digitally archived by Harry for whatever future projects we may dream up. This frees Orlando Allen from the task of having to directly deal with his father's legacy alone, so expect adventures new from the Flame Dog.

Gilli herself is doing relatively well. As Harry said, her synapses don't fire as smoothly as they used to and she has good days and less good days. She eats like a little bird and sometimes you worry she may soon fly away, but for now she remains with us still gently and defiantly Gilli. I'm sure there are many of you out there with elderly relatives who know the situation well.

Third box-set up-date:- PRE-ORDER AVAILABLE HERE FROM 7th of the 7th - THIS THURSDAY!

Searching for the Spark:- a fully comprehensive Steve Hillage box set! 22 CDs from the period 1969 to 1991 with all the released albums and loads of exclusive unreleased rarities:- live recordings, demos, studio tracks. A comprehensive and beautifully produced book detailing the whole story, and exclusive memorabilia items. Release date set for late September 2016!

We have been immersed in this project for months and now the intensive home stretch work schedule lies before us like a shining path to a late September release date. It has been and is intense, but at the same time the deepest of fun - inner/outer dimensional time travel made real - or something like that!

The limited edition box will be packed with all manner sounds, images and items to astound and delight. I suggest putting a couple of cappuccino's worth, or a pint of beer's worth of cash into a piggy bank each week - you don't want to miss this. I'd love to be there for the opening of every box to witness the Ooooos! and Ahhhhhs!.

Today, Sunday March 13th marks a year since daevid allen died. It's been a full revolution around the Sun and however much further round the Galaxy our Universe has travelled since he 'stepped off' the planet - it is already a huge distance ago. I do miss him, or to be more precise I miss the possibility that he might bustle into the GAS office (you could hear him coming up the stairs), often with a female companion and always with a head full of plans, agendas and tasks to accomplish, most of them impossibly unfeasible - but hey we would give many a go.

Despite 100s of visits over dozens of years daevid didn't always relish coming to the GAS HQ - by the end we knew each other too well and simultaneously not at all, as it is with close friends - it was where his plans might crash headlong into practical 'realities'. To achieve all he dreamt daevid needed far more philanthropists than he was ever able to attract - the more conventional route via record companies he didn't handle so well.

It's said that people aren't forgotten until everyone who knew them has also 'left the building'. That maybe so, all who met or saw daevid will certainly hold his memory dear for many years yet - although if you have left a body of work such as his the world's remembrance of you is bound to continue far longer and reach much further.

The photograph of daevid is from the around the time I first encountered him in 1973. Nutcase.

As daevid always hoped Gong would continue without him he would be delighted that not only does it continue, it thrives. Recording for the new Gong album has sucessfully progressed for some time, all will be completed by the end of April. Basic tracks were recorded by the band, Kavus Torabi, Dave Sturt, Ian East, Cheb Nettles and Fabio Golfetti, who decamped to the UK from Brasil for the duration, live at Brixton Hill Studios.

Due to some welcome guests, in places the album will witness the mingling of essence of Gongs, perhaps including a little touch of an alien in the night. Fingers crossed, as long as nothing changes the album is scheduled for release in September.

While I've been 'away' there has been quite a flurry of activity, most of which I'm only just getting on the website. It could be another sign of Western society attaining 'Peak Stuff', or the on-going results the much needed out-pouring of self-expression that could lead the way to a brighter future? Who knows, some of it is rather fine though.

I'll get the basic Bazaar pages and ordering facilities up and running for the releases listed below. When they are available the titles here will linked and become active. Then I'll double back with some comments and samples. All will be bazaared, detailed, menued, newsed, commented upon and generally Planet-Gonged over the next while.